The last time I bought panniers, George W. Bush was still in office.   I was living in Boston and needed an easy way to haul stuff for my daily commute into Cambridge.    I bought a Blackburn Expedition rack and a set of used Cannondale branded panniers on eBay. 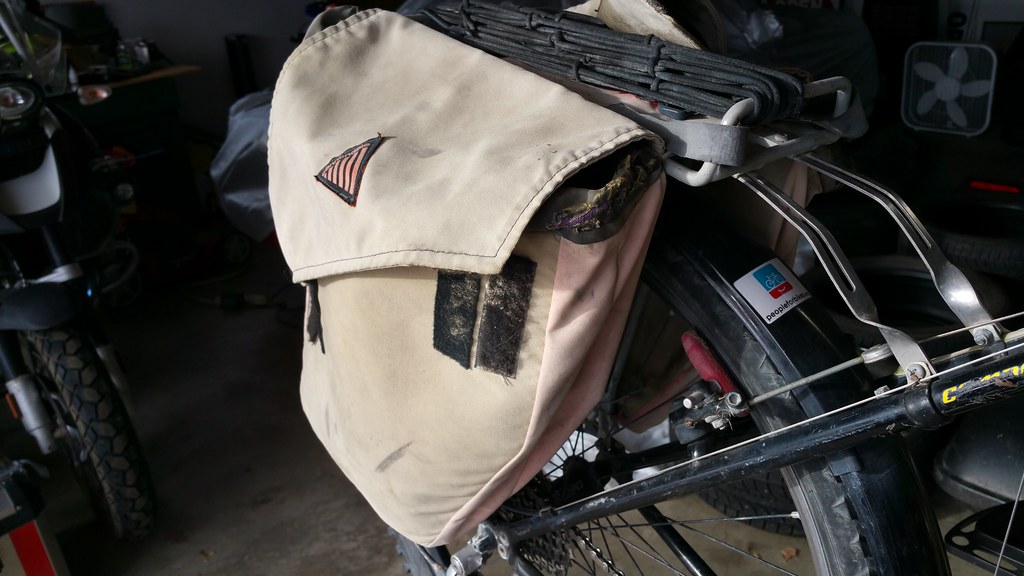 Over the last thirteen years, the bags survived countless trips to grocery stores.   I regularly overstuffed them with six packs of beer and jugs of milk. They endured years of being left outside in the salt air when I lived on Nantucket.   The bags held up to the harsh sunshine of Colorado, although the fluorescent orange faded.   They held up to being towed behind cars, literally thousands of miles of whipping wind gusts.   They've lasted longer than my first marriage.

The bags needed a few repairs along the way.  The built-in elastic bungee fasteners failed, replaced with galvanized fence wire which permanently mounted them to the rack.  When holes in the nylon fabric appeared,  I used a glue gun to patch them together.   But the journey is now reaching an end.   They're falling apart.

My primary use for panniers is to provide onboard storage on a townie bike.   I mostly haul groceries and sweaty yoga mats, beer and layers of clothing,  and of course water bottles.    Although tempted by nice, highly rated products from Ortlieb (among others), I'm not about to go touring on this machine.  I also don't want bags so expensive that I would be upset if they were stolen.   In this college town, theft is a real possibility.

Surfing around the web, I found a company called Abaxo selling what looks like decent quality panniers for a very reasonable price.   The description sounded good:  "Waterproof nylon canvas with quick-attach mechanism with highly reflective safety patches on front and back, extra thick heavy duty material and construction, tapers at the bottom for extra heel clearance, handle with rubber grip for easy carrying, and a patented no-rattle attachment system plus bottom spoke protection shield."

At $35.87 each (including shipping), the price was less than half comparably sized Ortliebs.    Abaxo also seems to maintain high quality feedback ratings on eBay and a reasonable return policy.  What did I have to lose?

You can find the Abaxo panniers on eBay in a choice of three colors.   My initial impressions are that the quality is acceptable, especially for the price.   I'll post an update after I put some miles on these bags.

p.s. If you're looking for a rack to pair panniers with, I recommend the Blackburn EX-1 Expedition Rack.  It has held up even better than the Cannondale panniers.  I've loaded the rack with almost 3x the 45lb duty rating (buzzed girlfriend) for short rides without any issues.
Posted by Osman at 2:07 PM