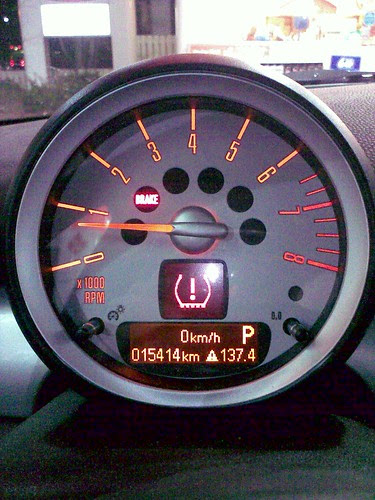 With the arrival of a red flashing exclamation point on the dashboard about a month ago, my 2001 LS430 began telling me it wanted new brake pads. Fine, time to order parts.
Oh, but if you're a gear head, you know it's not so easy. It's NEVER that easy.
I started with a little research on the brake system. Here's what I learned:

WIN:
The Lexus calipers are supposedly super easy to slap new brake pad and the rotors are so thick, they almost never need replacement.

LOSE:
The brake pad sensors are consumable items on the LS430. Once the pad wears down low enough, the sensor is activated and it's toast. Order a new sensor. Unlike the sensors on my old Mercedes, which were so cheap, brake pad manufacturers included them in the box for FREE, the Lexus sensors are expensive.

And now we get to the fun bit - time to shop online. I needed a set of front brake pads and a brake pad sensor (at least one. No, they're not sold in pairs). Since my cabin air filter needed replacement, I'll order one of those too.
Brake pads are fairly generic products and apparently nobody offers performance reviews on the after market. At least I couldn't find reviews online. So, I opted for Bendix pads.
First, a phone call to my local Lexus Dealer, Stevinson Lexus in Frederick, CO. They wanted almost $250, including tax. That didn't include the hour or so of schlepping out from Boulder to Frederick. The parts might come in a Lexus box, but you know they are made by an OEM supplier (like Bendix). $250 is a lot of clams.
Next, I went back to the forums for supplier recommendations. I found two different websites recommended: Iron Toad and My Lex Parts. When I check them out, both look like crappy dealer sites. My Lex Parts is part of another site called Lexus Parts World, whose offerings include sunglasses. Classy.
These guys both have the parts for just under $150, including shipping. Not bad, and hey... that's $100 saved.
One more stop, and then I'm done. I went to The Benz Bin a site which routinely had the best prices for Mercedes parts. As I had recently learned, they also seemed to have the best priced parts for my Toyotas too. They wanted 124.28, including shipping. Not bad. Another $25 saved.
Before I ordered, I thought I'd check out a few of the suppliers popping up in my Google search. I checked autopartswarehouse.com and carpartswholesale.com. These sites seem to offer the part for less, but when shipping is added to the total, I get the exact same $124.28. Odd, but the navigation on the sites are identical too. They're the same place with a different url and site wrapper.
Fine, I decide to go ahead with the The Benz Bin. Now here's where it gets weird. Their website won't process my order. I tried it in two different browsers and the site stalls when I submit my credit card information. So I hit the live customer service button.
On comes a representative. He asks me for the part #s and creates a custom order on autopartswarehouse.com. My hunch was right, these are the same websites. When the chat representative does it, the price drops to about $95, including shipping.
"Woot!" I thought, as I went ahead and ordered. 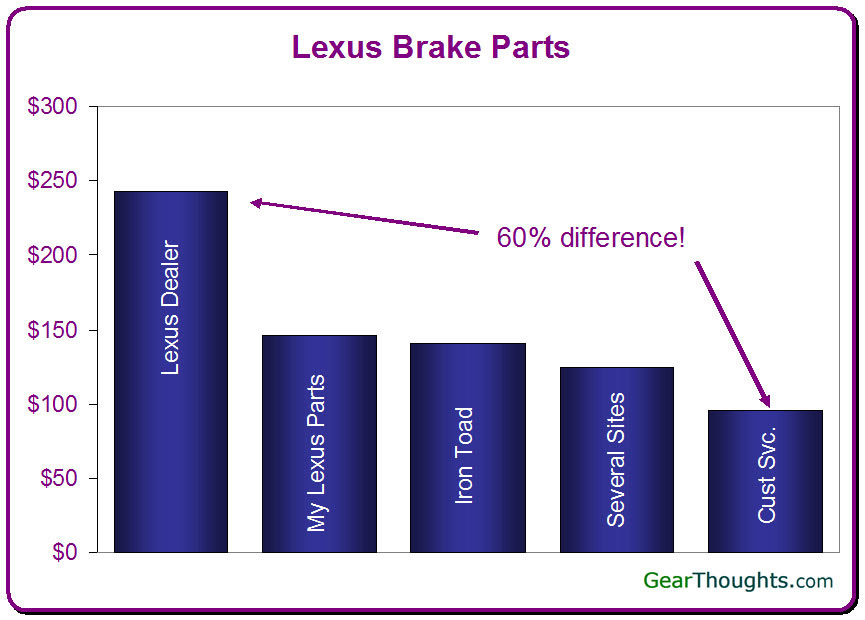 The chart above shows the radical difference in prices for essentially the same parts. A little shopping around saved nearly 60% from the dealer price, showing that once again, the dealer is usually the worst place to buy parts.
FULL DISCLOSURE: I get absolutely NOTHING from any of the sites mentioned in this web post. No free parts, no discount on shipping, not even a t-shirt. My local dealer will probably even hate me and take it out on my LS430 for publishing their price gouging.
I should also mention that when I ordered through The Benz Bin online representative, he redirected me to Auto Parts Warehouse website to complete the order. Despite the illusion of being different businesses, several of these competitors were the same corporation.
Posted by Osman at 3:12 PM

I completely agree, great aricle! I’m glad I stumbled across this website!